Lawsuits between retailers and their landlords have become fairly commonplace in New York City over the last couple of months, but when Valentino sued its Fifth Avenue landlord last month, it wasn’t over rent payments or a force majeure clause: The Italian luxury retailer claimed it should be allowed to break its lease because its address was no longer prestigious enough.

Valentino’s lease states it will operate consistent with the “luxury, prestigious, high-quality reputation of the immediate Fifth Avenue neighborhood,” and in the lawsuit, it said its ability to do that “has been completely frustrated.”

The suit, which garnered a flurry of press attention, may well be a scheme to avoid excess costs in a wilting global economy and cratering retail business. But it could also be a harbinger of a completely new era for the 10-block strip of Upper Fifth Avenue that once was the world’s most expensive retail corridor, an era with fewer shoppers and lower rents. 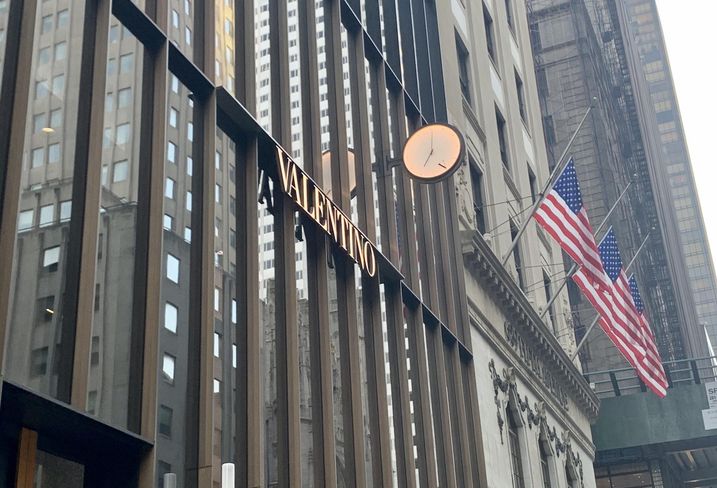 The average asking retail rent on Fifth Avenue between 49th and 59th streets was at $3K per SF at the end of June, according to CBRE. That lofty price represents a nearly 5% decrease from a year earlier, per CBRE, and it was down nearly 25% from 2018, when asking rents along the strip were north of $3,900, according to the Real Estate Board of New York.

Now, though the backers of Fifth Avenue claim it will continue to carry the cachet that has driven those stratospheric rents, many predict a reality check, in the form of drastic rent reductions, is on the way.

“Rents are going to be under $1K a foot for the first time in 20 years. It was the late ’90s when they were last under $1K a foot,” said CBRE Vice Chairman Richard Hodos, who arranged the deal for Ralph Lauren’s flagship store at 711 Fifth Ave., as well as Victoria’s Secret and Microsoft’s flagship leases on the same strip.

He said before the coronavirus hit the city, he had negotiated a lease for a space on Upper Fifth, as the luxury strip is known, for $1,300 per SF. It ultimately fell apart, but it showed where the market was headed before the health crisis.

“We saw this exponential run-up, it was irrational exuberance. There were tenants that were outbidding each other, it was ridiculous,” he said. “The landlords benefited from it, but we are in a different wolrd today — though landlords may not admit it to the press.” 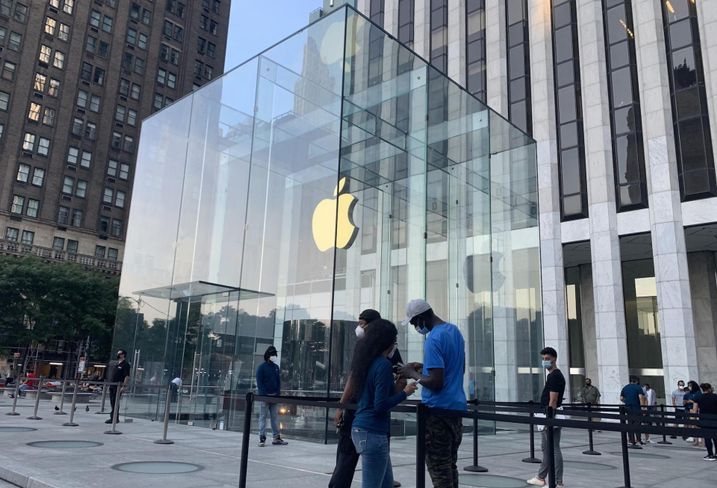 Now, as the city reels from the impact of the health crisis and stay-at-home orders, the crowds for which it is famous are nowhere to be seen. Even on the most blistering of summer days, Upper Fifth was usually packed with people congregating outside stores and tourists brushing fellow pedestrians with shopping bags.

But on Sunday afternoon, the strip was empty. A sprinkling of people drifted along the street, mainly in masks.

“There are no customers,” said one worker in a store selling New York City merchandise close to Rockefeller Center. Scores of “I Love New York” T-shirts sat untouched on hangers next to rows of perfectly still snow globes. “Last year at this time, our average [sales per day] would be $6K or $7K. Today, it’s not even $500.”

Valentino’s lawsuit over its 693 Fifth Ave. location, first reported by The Wall Street Journal, follows multiple high-profile blows that the strip has been dealt in recent years.

Ralph Lauren decided to close its flagship Polo store at Fifth Avenue and 55th Street back in 2017. Then last year, Tommy Hilfiger announced it would close its global flagship at 681 Fifth Ave. The iconic Lord & Taylor store at 424 Fifth Ave. closed after selling to WeWork. It is now owned, ironically enough, by Amazon.

In 2019, tourists flocked to the city — more than 67 million visitors came, a record. But the outlook for out-of-towners this year is grim. Broadway, which is one of the city’s biggest draws, is closed until 2021.

Meanwhile, visitors from the latest coronavirus hot spots in the U.S. are required to self-quarantine for 14 days if they come to New York, and many countries have banned travel from the U.S. for fear that American travelers — or tourists coming back — would bring the virus to places that have succeeded in stifling its spread. 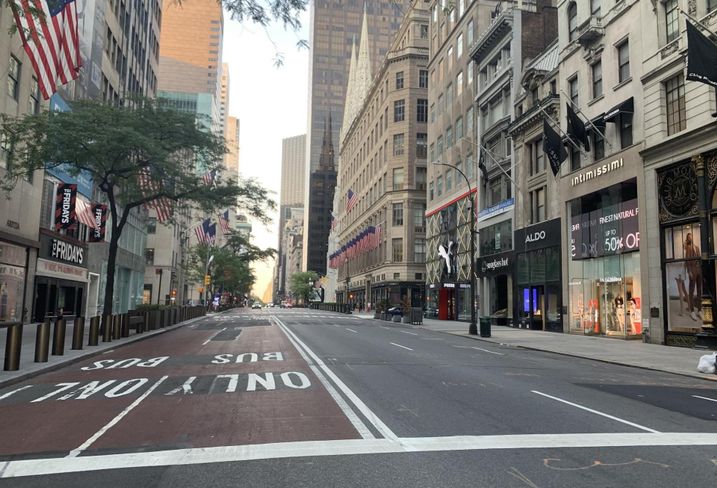 HR&A Advisors principal Sulin Carling said her company’s analysis found retail strips around the city that have a significant residential presence, which don’t rely heavily on a daytime population, are better-positioned to recover from after the crisis. Fifth Avenue, she said, could be vulnerable to a lack of office workers just as much as to the absent tourists.

“If people shift to remote work, that’s a significant decline in the consumer base,” she said. “Fifth Avenue is also a significant destination for apparel and, even before COVID, that was one of the types of retail that was most affected by e-commerce and most easily replaced by online shopping.”

Though he is predicting a slide in rent, CBRE’s Hodos expects Fifth Avenue will stumble out of this monumental retail shakeup alive. As stores around the city downsize and shrink their footprints, he expects many will opt to keep their Fifth Avenue locations, purely for the number of eyeballs it gets.

While Fifth Avenue may have the farthest to fall, other posh neighborhoods have been battered more thus far: Retail rents on Broadway and Prince Street in SoHo dropped 30.1% and 37.5%, respectively, between Q2 2019 and 2020, according to CBRE. Retail rents in Manhattan overall fell 8.1% year-over-year. 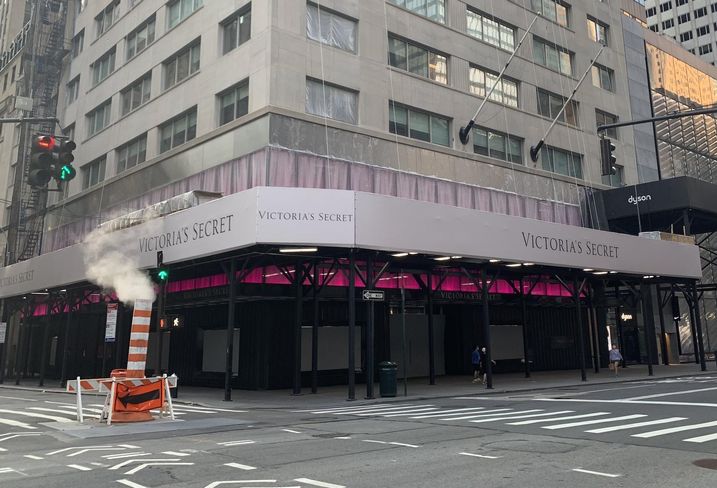 Fifth Avenue Association President Jerome Barth is adamant the strip will draw the same aspirational shoppers it has for the last few decades, even in a fundamentally different, post-coronavirus world. It is still an environment, he believes, that will attract the world’s most iconic brands.

“There is no doubt in my mind. First, I believe the luxury consumer — for a number of reasons — will be the most likely to return to normal, pre-COVID-19 habits,” he said. “A bag from Fifth is not like a website or an airport store bag — it is tied to cultural institutions, you are part of history. It transfers meaning to your purchase … And I think those attributes will play in the favor of Fifth Avenue.”

On the matter of rental reset, he said he had no opinion one way or the other. “There is going to be lively conversation on rent. Where it ends up I could not say,” he said. He noted lines outside Dior and Cartier had already begun forming.

The Moinian Group Executive Managing Director of Commercial and Retail Leasing Gregg Weisser said in an email that the company has around 70K SF of retail space leased and occupied in its Fifth Avenue properties, for an occupancy rate just under 88%.

“We’re quite happy with [that] under the circumstances,” Weisser said. “We are marketing the remaining 10K SF of small retail suites, and as long as the city continues to reopen safely, in smart, controlled phases and in accordance with health officials, we hope to sign tenants for those few, remaining spaces in the new year.” 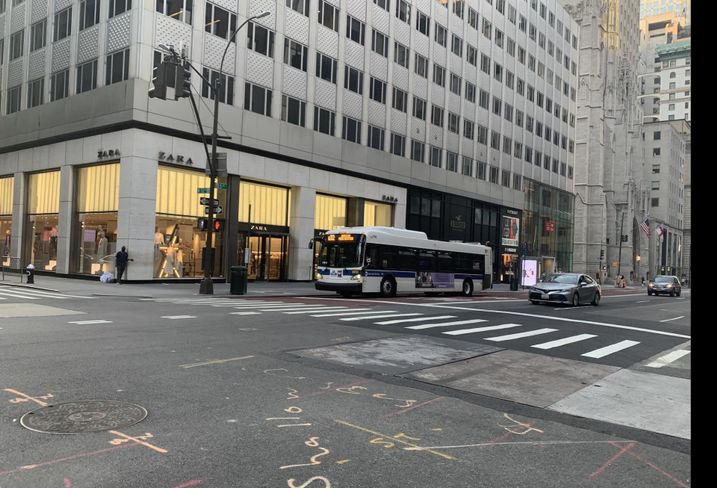 Zara on the corner of Fifth Avenue and 52nd Street

JLL Vice Chairman Patrick Smith said Fifth Avenue has been a destination for the last 100 years, and it would continue to be one. But what the makeup of the tenancy will look like, he isn’t as sure. He and his team are leasing retail space at 587 Fifth Ave., previously home to Karen Millen, which went bankrupt in 2017.

Tenants are reporting business at the moment is down 80% to 90% he said, and landlords are considering shorter-term deals with rent incentives in order to lock down occupants and to help develop new retail concepts.

“There are still many retailers that believe they need relief, and there is not a whole lot of relief out there for them,” Smith said. “Everyone talked about a July 1 reopening. That’s great if the city and state allow you to do that, but not if there are no customers.”

New York City is now in Phase 4 of its reopening, and stores may allow shoppers, though capacity is reduced and they may refuse entry to people who do not have their faces covered.

“What does this corridor look like moving forward? I’ve been doing retail for 30 years — I don’t know,” he said. “There is no kind of road map.”

After Tumble in Global Hotel Sales, Rebound Uncertain Amid Coronavirus