Cruise lines are offering more options for passengers who need a respite from kids.

From adult-only vessels to private areas just for the oldies, there are many options for passenger these days. We’ve compiled a list of adult-only lines as well as some of the options on ships with children.

Both of Viking’s deluxe brands – ocean and river cruises – have a strict policy that guests must be 18 and above to sail. The company said the policy fits in with the line’s focus on cultural enrichment ashore and onboard the ship.

“Previously, we had allowed a degree of flexibility in the minimum age for travel, but increasingly our guests have told us how much they appreciate an environment where they can travel without children,” Viking senior vice president of marketing Richard Marnell said.

The line’s ocean and river ships are all identical, so returning guests feel a sense of comfort and familiarity. The ocean ships are Scandinavian in their design, so the ships have light filled rooms, with clean, white and cream coloured decor. There is a Nordic-inspired spa as well as a special snow room – a pioneering first. All suites have veranda balconies, and wine and beer are included in the price of the cruise. But aside from no children, you’ll also find no umbrellas in your cocktails, as well as a ban on formal nights and casinos. It’s a smart move that differentiates the line from any other cruise company. The brain child from Sir Richard Branson, Virgin Voyages, is the newest cruise line to enter the market. Sir Branson, famous for his fantastic marketing stunts, advertises “no kids, no buffets and no limits” for his new cruise line. The first ship in the fleet, the Scarlett Lady, which will be launched next year, will have nine different restaurants including Wake, which offers a theatrical take on steak and seafood inspired by the Wolseley in London and The Grill in New York. For the vegetarians, there is also a special restaurant called Razzle Dazzle which will host a drag brunch by the ship’s resident drag performer. The super suites onboard will come with ‘rockstar coordinators’ rather than butlers and furnished with European king-sized beds as well as upgraded bath amenities. They’ll be adorned with guitars on the walls . For the adults only ship, guests will also find specialised champagne tables, hammocks and even outdoor showers. If you’re feeling a bit more daring, there is a tattoo parlour on the Scarlett Lady if you want to get inked to remember your cruise. Known as one the pioneering line to create adults only ships, P&O World Cruises has two ships which cater only for adults. The Arcadia and Oriana both have undergone major refurbishments and have updated cabins, suites, public areas, main dining rooms and more. The cruise line is perfect for adults who want to spend their holiday with cruisers of their own age, but not forego the big ship cruising experience of multiple dining venues and entertainment offerings. P&O World Cruises also has the Adonia which is a small intimate ship, perfect for adults who want something in between big ship ocean cruising and smaller boutique lines. But if these lines don’t quite fit your cruising style, itinerary or plans, these are some tips that will help you cruise without the kids.

While luxury lines don’t ban children, luxurious high-end companies like Silversea, Seabourn, Regent Seven Seas as well as smaller lines like Oceania Cruises and Windstar are more geared towards adults. During the school holidays, some lines offer children’s programs. The cruises are not overrun with children but the ones you do find onboard, tend to be well behaved and well-travelled. 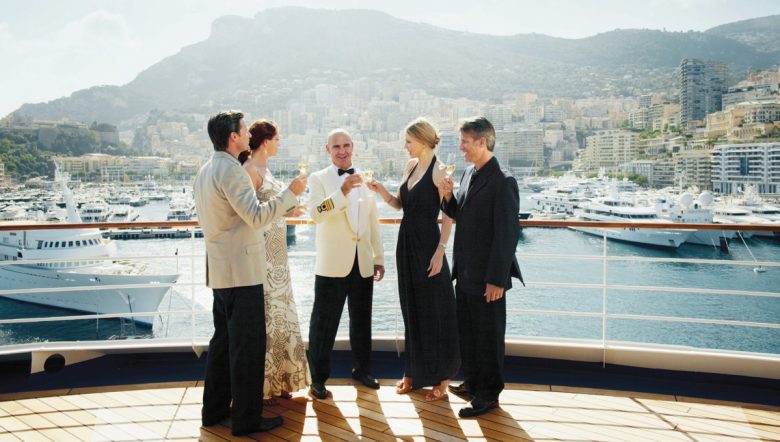 Hardcore adventure and expedition ships and  often don’t have children onboard. Generally, itineraries to the polar regions like the Arctic and Antarctica, as well as through the jungles of Southeast Asia, rarely have children onboard. Like the luxury ships, you might find a few, but they too, generally are rather worldly for their age. The easiest way to avoid the kids is to make sure you sail during school terms. You will rarely find children onboard premium cruise lines during this time. It’s unavoidable when you’re sailing on contemporary family vessels from P&O Australia, Carnival Cruise Line and Royal Caribbean. But at least the pools may be a bit quieter. Most families tend to take shorter and weekend cruises. So one way to avoid children is by picking cruises of 10-nights or longer. If you’re heading to the South Pacific, opt for a longer cruise during the school term. If you’re doing a lengthy repositioning cruise, grand voyage or even a world cruise, you’ll just be hanging with the adults.

If you can’t avoid the school holiday sailings, try booking a suite in the upgraded VIP areas. Lines like Norwegian Cruise Line, Holland America and MSC offer guests haven areas which have their own pool, lounge areas, dining room and a private entrance. There are some families which do frequent these areas, but again, it’s most likely they will be on their best behaviour. Now if you can’t afford the VIP treatment, seek refuge in the kids-free area. These safe little havens usually are around a bar and have cabanas and a small pool for the adults to relax. Some areas, like on Royal Caribbean’s Ovation of the Seas also has a restaurant/café attached. So you can enjoy your cake and eat it too. Most river cruise lines, while are open to having children onboard, might not attract families because of the range of facilities onboard. The itineraries are also designed more for adults, as river lines have more enrichment and cultural shore excursions. Explore Antarctica on an exclusive Country Living holiday in 2022