What distinguishes a great photograph from a vacation snap shot? It’s tough to explain but relatively easy to see. Many people go on an African safari hoping to capture amazing wildlife photos to document their trip, wow their friends, and maybe even make some prints for their home. Of course, you’ll need the right equipment and a good handle on the technical aspects of photography and your camera’s settings (more on that here), but you also need that little extra something. Great safari photos require great light, perfect timing, and a little bit of luck.

Here are a few tips to help you when photographing animals on safari:

1) Learn the rules of photography

Photography is full of rules. The “rule of thirds” is great to keep in mind—don’t put your subject or the horizon bang in the center of your photo. Instead, mentally break your image into thirds, both horizontally and vertically, and compose so that major elements of your picture fall along those lines.

Shoot with the sun at your back so the subject is nicely illuminated and you can achieve a balanced exposure with no blown out highlights (areas of the photo that are completely white) or lost shadow detail (areas that are completely black). Don’t trust the playback on your camera’s LCD; learn how to use the histogram to make sure. For the same reason, shoot during the “golden hours” around sunrise and sunset for soft light without harsh shadows. 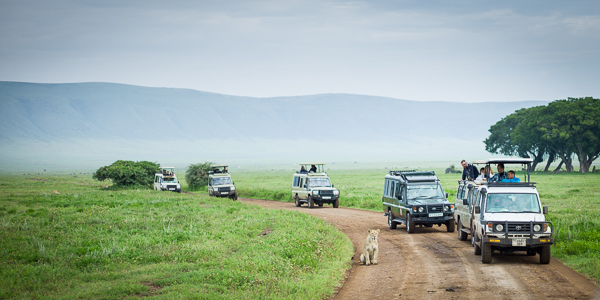 Carefully frame your subject. For wildlife and the big five, compose so that the subject is facing into the center of the picture rather than out of the frame. Give your subject some breathing room—show the environment around it rather than zooming in as far as possible. On that note, make sure you don’t cut off body parts with your framing. Don’t cut off ears, horns, tails, or wings, especially.

Rules are made to be broken, so experiment with ignoring the rules above. A centrally placed subject in a stark environment often has a very pleasing symmetry. Under or overexposed images can have a mysterious and artistic feel. Shooting directly into the sun creates interesting silhouettes (often you’ll have to underexpose by several stops) with the potential for sun stars (use a very small aperture). Zooming way in on wildlife can make for interesting abstract images. 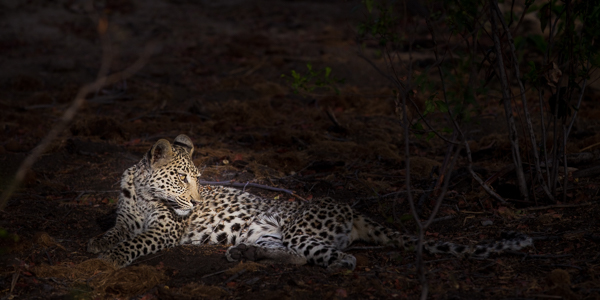 3) Get eye-level with your subject

The angle you take photos from has a huge impact on the final product and is one of the easiest ways to go from safari snapshot to great wildlife photo. In general, you want to take photos from as low an angle as possible. Shooting from your subject’s eye level instantly creates a more evocative portrait. It’s difficult to get low in safari vehicles, which are specifically designed to give you a high vantage point. On an open vehicle, you can try to shimmy down beside the seat or shoot with live view while holding your camera as low as possible.

The seat next to the driver is the best for getting low, but sometimes your view will be obstructed. In East Africa, where many safari vehicles have pop up roofs, avoid the temptation to shoot from there, rather try shots from the base of the window. At some sightings, it might even be possible to slide out of the vehicle and shoot from the ground…but make sure to ask your guide first!

Let’s face it. There are millions of great, close-ups of lions and leopards, and we’ve all seen them. When you’re at a sighting, grab a few shots of the main subject, then experiment with other ideas to get something more original. Show the wildlife in the setting of its wider environment, capture the experience of being on safari by including people or vehicles in the shot. Think beyond the big five, and keep an eye out for other interesting subjects—birds, insects, plants, landscapes, and even the lodge where you’re staying!

Wildlife photography is all about timing. Timing means being out when the light is right—usually early or late in the day. It also means the right time of year. Some safari destinations have clear, crisp skies some months and dusty, distorted, murky air in others. Dramatic weather formations, more common in the rainy season, are an import aspect for landscape shots and sunsets. 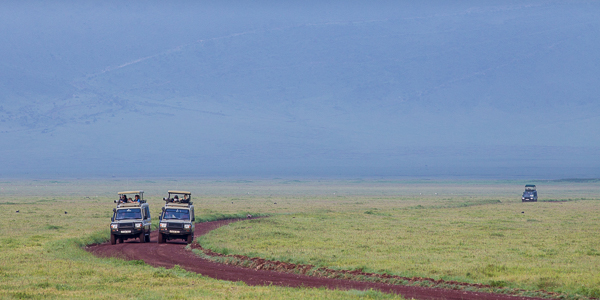 The most difficult of all is being in the right place at the right time to capture the action. That’s all about luck for most safari goers with only a few days’ worth of game drives. Professionals spend weeks, months and even years at a place to capture iconic action shots. But, you never know when you’ll get lucky and see something incredible, so be alert, observant, and expect the unexpected by making sure your camera is primed and ready. This is especially important first thing in the morning when you might have wacky exposure and ISO dialed in from the previous night. You don’t want to be fumbling with settings when you happen upon a fleeting moment of action.

the destination for post-safari romance